I am having another bout of career angst. No, angst is too dramatic.  Maybe just plain old anxiety.  Of course it’s Monday, where many of us face the prospect of a week doing something that we really don’t find enthralling.

I use the word ‘enthralling’ deliberately. It’s an interesting word, one that has largely changed in its use between now and the early examples from the 1600s given by the Oxford Dictionary.  Originally, it meant ‘To reduce to the condition of a thrall; to hold in thrall; to enslave, bring into bondage; to ‘enslave’ mentally or morally.’  Its meaning has been extended in a more positive direction, as in ‘Now chiefly, to captivate, hold spellbound, by pleasing qualities’.

I think most of us would like to wake up on Monday morning and feel enthralled by the prospect of going to work.

A few weeks ago I had to take time off work because I had reinjured my back.  Unable to sit, my physio encouraged me to take gentle walks. I headed off to the Botanic Gardens with my ipad.  With great care and with lots of rest stops, I made it round the main path loop.  The rest stops coincided with photo opportunities, as I stopped to admire the winter flowers that I found.  In retrospect, I realise that I was enthralled.  Despite the pain, and the freezing temperatures, I was still enthralled.  It was wonderful!  As the poet, Mary Oliver, says:

“Instructions for living a life. Pay attention. Be astonished. Tell about it.”

Here I am, telling about it. 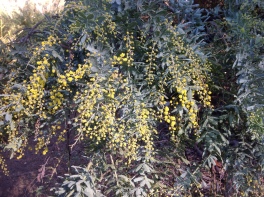 From left, the wonderfully floriferous grevillea called ‘Lady O’, the prostrate form of Acacia baileyana, Banksia spinulosa var. neoanglica and a Geraldton wax called ‘Cascade Brook’.  I am definitely going to try and find ‘Cascade Brook’ for the new native bed that I am hoping to construct over the summer.  Lady O is pretty easy to find in Canberra nurseries, as everyone seems to appreciate how reliable she is, great flowers, bird attracting in winter and frost hardy.  I had her in my last garden and would definitely make space for her, even though she may not be a great choice for the vase.  I wasn’t interested in floristy previously so I never thought to cut her.  I think for my next arrangement I might try a banksia.  I am not particularly confident on how or even what I should do, but you have to learn by doing with floristry.  I still have a branch of this amazing something from the Protea family that I bought last week to make a birthday arrangement for a friend.  It has a seductive silky texture and combined perfectly with the apricot spray roses.

How do I find that same sense of delight and enthrallment in my working life that I get from writing about plants and flowers?  From arranging them and growing them.  The obvious answer would be to retrain in horticulture.  But not with a back injury and my cancer producing skin.  Retrain as a florist?  Well yes, but I can’t afford to live on a shade over the minimum wage, certainly not in this town.  I met a florist recently and she says she gets paid $19 an hour, or $39 520, assuming a forty hour week.  The Canberra Times (26 June, 2015) noted that ‘The average income of a full-time ACT worker is about $90,000 a year – a smidge above what a typical APS level 6 public servant earns. (And, in Canberra, more public servants are employed at executive level 1 than APS6)’.  Just for the record, my academic job is well below the average…

Still trying to figure out how to translate that sense of astonishment and communication into a career I can live with, and afford.  If you have suggestions, let me know!