I am having another bout of career angst. No, angst is too dramatic.  Maybe just plain old anxiety.  Of course it’s Monday, where many of us face the prospect of a week doing something that we really don’t find enthralling.

I use the word ‘enthralling’ deliberately. It’s an interesting word, one that has largely changed in its use between now and the early examples from the 1600s given by the Oxford Dictionary.  Originally, it meant ‘To reduce to the condition of a thrall; to hold in thrall; to enslave, bring into bondage; to ‘enslave’ mentally or morally.’  Its meaning has been extended in a more positive direction, as in ‘Now chiefly, to captivate, hold spellbound, by pleasing qualities’.

I think most of us would like to wake up on Monday morning and feel enthralled by the prospect of going to work.

A few weeks ago I had to take time off work because I had reinjured my back.  Unable to sit, my physio encouraged me to take gentle walks. I headed off to the Botanic Gardens with my ipad.  With great care and with lots of rest stops, I made it round the main path loop.  The rest stops coincided with photo opportunities, as I stopped to admire the winter flowers that I found.  In retrospect, I realise that I was enthralled.  Despite the pain, and the freezing temperatures, I was still enthralled.  It was wonderful!  As the poet, Mary Oliver, says:

“Instructions for living a life. Pay attention. Be astonished. Tell about it.”

Here I am, telling about it.

From left, the wonderfully floriferous grevillea called ‘Lady O’, the prostrate form of Acacia baileyana, Banksia spinulosa var. neoanglica and a Geraldton wax called ‘Cascade Brook’.  I am definitely going to try and find ‘Cascade Brook’ for the new native bed that I am hoping to construct over the summer.  Lady O is pretty easy to find in Canberra nurseries, as everyone seems to appreciate how reliable she is, great flowers, bird attracting in winter and frost hardy.  I had her in my last garden and would definitely make space for her, even though she may not be a great choice for the vase.  I wasn’t interested in floristy previously so I never thought to cut her.  I think for my next arrangement I might try a banksia.  I am not particularly confident on how or even what I should do, but you have to learn by doing with floristry.  I still have a branch of this amazing something from the Protea family that I bought last week to make a birthday arrangement for a friend.  It has a seductive silky texture and combined perfectly with the apricot spray roses.

How do I find that same sense of delight and enthrallment in my working life that I get from writing about plants and flowers?  From arranging them and growing them.  The obvious answer would be to retrain in horticulture.  But not with a back injury and my cancer producing skin.  Retrain as a florist?  Well yes, but I can’t afford to live on a shade over the minimum wage, certainly not in this town.  I met a florist recently and she says she gets paid $19 an hour, or $39 520, assuming a forty hour week.  The Canberra Times (26 June, 2015) noted that ‘The average income of a full-time ACT worker is about $90,000 a year – a smidge above what a typical APS level 6 public servant earns. (And, in Canberra, more public servants are employed at executive level 1 than APS6)’.  Just for the record, my academic job is well below the average…

Still trying to figure out how to translate that sense of astonishment and communication into a career I can live with, and afford.  If you have suggestions, let me know!

Here in Canberra we are in the depth of winter.  I’m not sure if winter is the worst season to garden.  There’s the killing frosts (goodbye to my Crassula ovata) and the winds off the Brindabellas that feels like its straight off the Southern Ocean.  On the other hand, there’s rain to soften our baked clay and the UV index is low enough that I can spend time outside without fear of growing more skin cancer.

If you’d gotten organised earlier this year and planted seeds, winter doesn’t have to be dreary.  Organisation, however is not my strong suit. So here Iam, planting ranunculus and chincherees in pots, hoping for a late spring wealth of blooms for the vase.i have a north facing patio where they soak up stored heat, and hopefully getting over their delayed planting.

This horticultural rashness reflects the impact of the short course I recently completed in floristry.  I really miss it.It’s opened a whole new aspect of gardening to me, as well as news ways of being creative in three dimensional space.  My house is now festooned in flowers and it feels wonderful, even if the bank balance is suffering.  But, money so well spent.  It gives me hope.

so, ranunculus.  Chincherees.  I’ve planted thryptomeme, flax, and eyrngium for foliage.  I’ve rescued hydrangeas from the discard bin to be planted in the spring.  Teucrium for its delightful silvery foliage.  Wondering if I have the space for a snowball tree and an escallonia.  Is it possible to find Euphorbia oblongata, as Sarah Raven recommends?  So much delightful dithering.

The only thing that isn’t dithering is my lower back.  It is very decidedly  against this gardening lark.  Realistically, a woman with a squished disc and nearly seventy skin cancers removed is not a person who should be outside, let alone gardening.  Stuff reality.  I can’t live without flowers.

I made my first trip to the gardens at Old Parliament House this morning and photographed until the sun got too high.  I always feel renewed and soothed by a good garden, and its as if all the fear and angst that I experienced yesterday was happening to someone else.

Of course it didn’t, but its always useful to have yet ANOTHER reminder that these things pass.  As will the roses, but right now I have the anticipation of months ahead.

Fimbriata. Photo by the author.

This is Fimbriata which many, including me, love for the carnation like edging to its petals.

Tonner’s Fancy on a pillar in the Rex Hazelwood garden. Photo by the author.

This is one of the Alister Clark stable of roses, Tonner’s Fancy, doing a splendid job of covering a pillar. Most of his roses are very strong climbers. 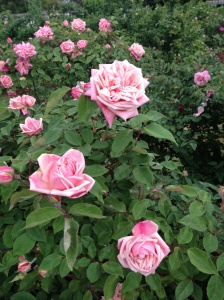 Le Vesuve. Photo by the author.

I’ve written about this rose before, Le Vesuve, in a post exploring anger and its associated emotions. I did do some follow up research on the naming of this rose, which will morph into a post, but for the moment, I am just enjoying her. If I move from the Watson garden to somewhere bigger, I would definitely give her a prominent place.

Looking forward to more dusk light treasures this evening in the species roses.